Songlines.Montevideo.Rostock are part of Territorio Especifico an expedition based collaboration of a group of artists, researchers and urbanists from South America and Europe, who worked together during two week intensives in Montevideo and Rostock, reflecting on sound as a contextual phenomenon of urban space.

Songlines is an appropriation with which I refer very associatively to the multidimensional spiritual and actual spacial orientation practise of the First Peoples of Australia. I respect their deep-time cultural memory and heritage to which I am an alien and I don´t claim any right to define or interpret their worlds. My use of Songlines is more literal  as sonic, sounding lines, strings and site-specific monochords.

Nevertheless these Songlines are also lines of orienting and connecting. They are activated, modulated and sustained through touch in motion. Walking along the vibrating physical line, holding it within the fingers while changing and ajusting pressure in relation to speed, I – and everybody else who does it – listens with the tips and ears to its buzzing harmonics. Saturated songs merge with the acoustic atmosphere of the surroundings and create a specific sonic memory of place and time.

Songlines are proposals for sharing a practice. The instruments are an invitation to tune-in and play with a place. To hold time, to enfold and embody space and place through moving sonically – musicaly and somaticaly.

Each constellation asks a playing body to connect differently to its strings and leads to a different choreography of touch guided movements. Only the movements of the players, in turn, make the strings, and the temporal site-specific architecture of the instrument visible meaning distinctable for the eye. Because as soon as one steps back a bit the eyes loos track and the strings vanish. The emerging sounds transgress these physical and visual limits by far, creating a wide sonic space. They merge and resonate with the ever changing acoustic atmosphere of the surroundings.

In Montevideo I used three different bongos, in Rostock I added a prepared 16 inch tomtom together with custom-made acoustic horns, that can be connected to differently resonating aluminium ‘tube-drums’. Furthermore I was looking for resonating bodies I might find on-site to directly attach the strings.

For me the core of these instruments and their play is to share tuning-in and playing together in exchange with a place. Listening to each other and to the surroundings makes it possible to merge and create a shared sonic and somatic memory of a place connected to a specific moment in time. Activated Songlines are both able to connect with the now of a place and create and recall embodied memories. 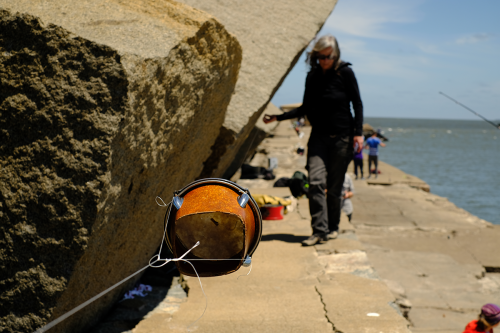 10.11.2021. First public instrument consisting of one songline on top of the wave-breaker wall of Escollera Sarandi Montevideo Harbor. 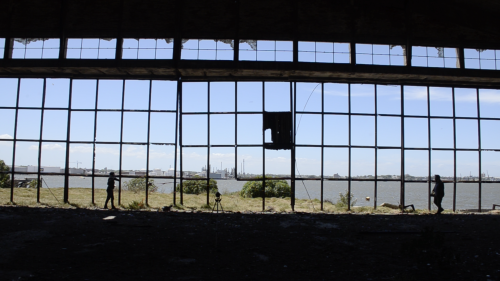 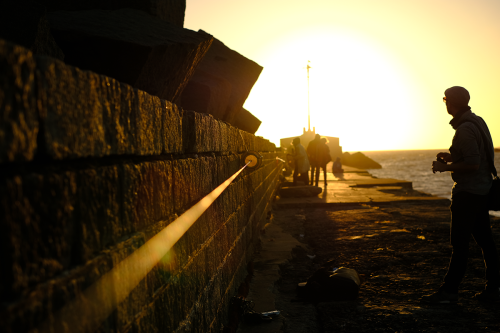 11.11.2021,  in the afternoon until sunset. Instrument consisting of two Songlines connected along the Escollera Sarandi Montevideo Harbor. 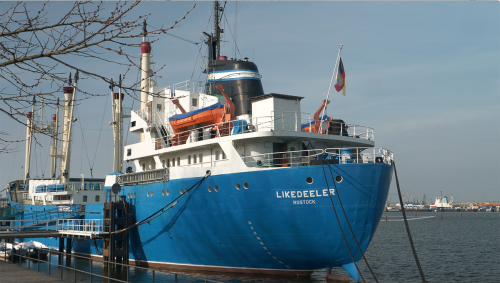 04.05.2022: Instrument consisting of five Songlines connected to the metal body of the Likedeeler, a former general cargo freighter and current youth ship at the Unterwarnow, Schmarl Dorf, Rostock.

Over the intire lenght of the quarterdeck five long instrumental strings of different diameter were tensed; one along each railing attached to a bongo, two parallel strings in the middle attached together to the skin of the tomtom and one close to the railing facing the water connected to an aluminium resonating tube with an acoustic horn. 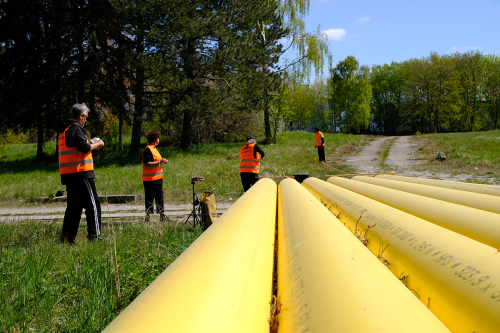 05.05.2022: Instrument consisting of four Songlines on the Greenfield, a harbor-river-site, between Rostock and Warnemünde next to the waste water treatment plant.

I attached two approx 30m long – 34 steps of mine – strings of different diameter to the lids of two 12m long iron pipes that were laying close to the entrance to the field seen from the street.

In addition I tensed two thinner strings between the small group of pine, birch and maple trees opposite the group of pipes. All Songlines started from the same birch tree: two leading to the pipes, two connected to aluminum tubs and acoustic horns of different sizes leading to different pine trees standing in a row one behind the other. 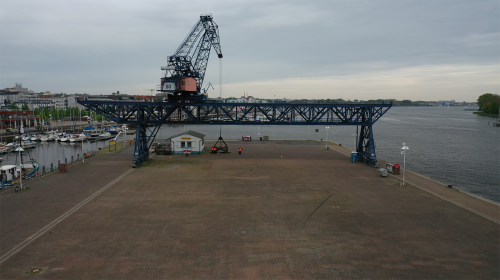 11.05.2022: Instrument consisting of two Songlines at the Old Port of Rostock. Starting at the big old shovel of the former industrial crane of the port two strings of different diameter were tensed each to one side of the crane. One to a bongo from Montevideo the other to the tomtom connecting the crane’s feet with the shovel to a triangular instrument. 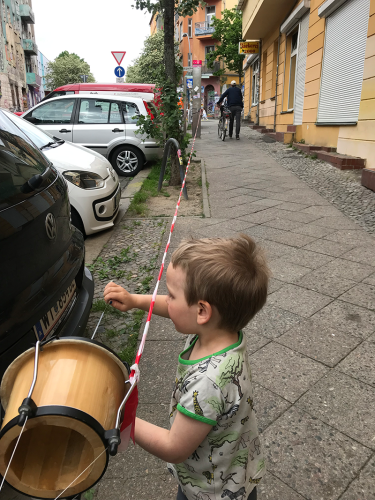 14.05.2022: One Songline tensed between a stationary telephone point and a street light at Liebigstraße, Berlin. Located for the first time in a residential neighborhood, this Songline became the most social and participatory instrument so far. Not only visitors of the show at Liebig12 also passers-by joint in started playing.